Join us for a Thanksgiving celebration featuring Oliva Cigars & Riverstar Vineyards! We will have a full Thanksgiving dinner, cigar specials, wine tasting, exciting raffles, and more!

Includes a cigar, dinner, access to the lounge and specials on all featured cigar purchases. 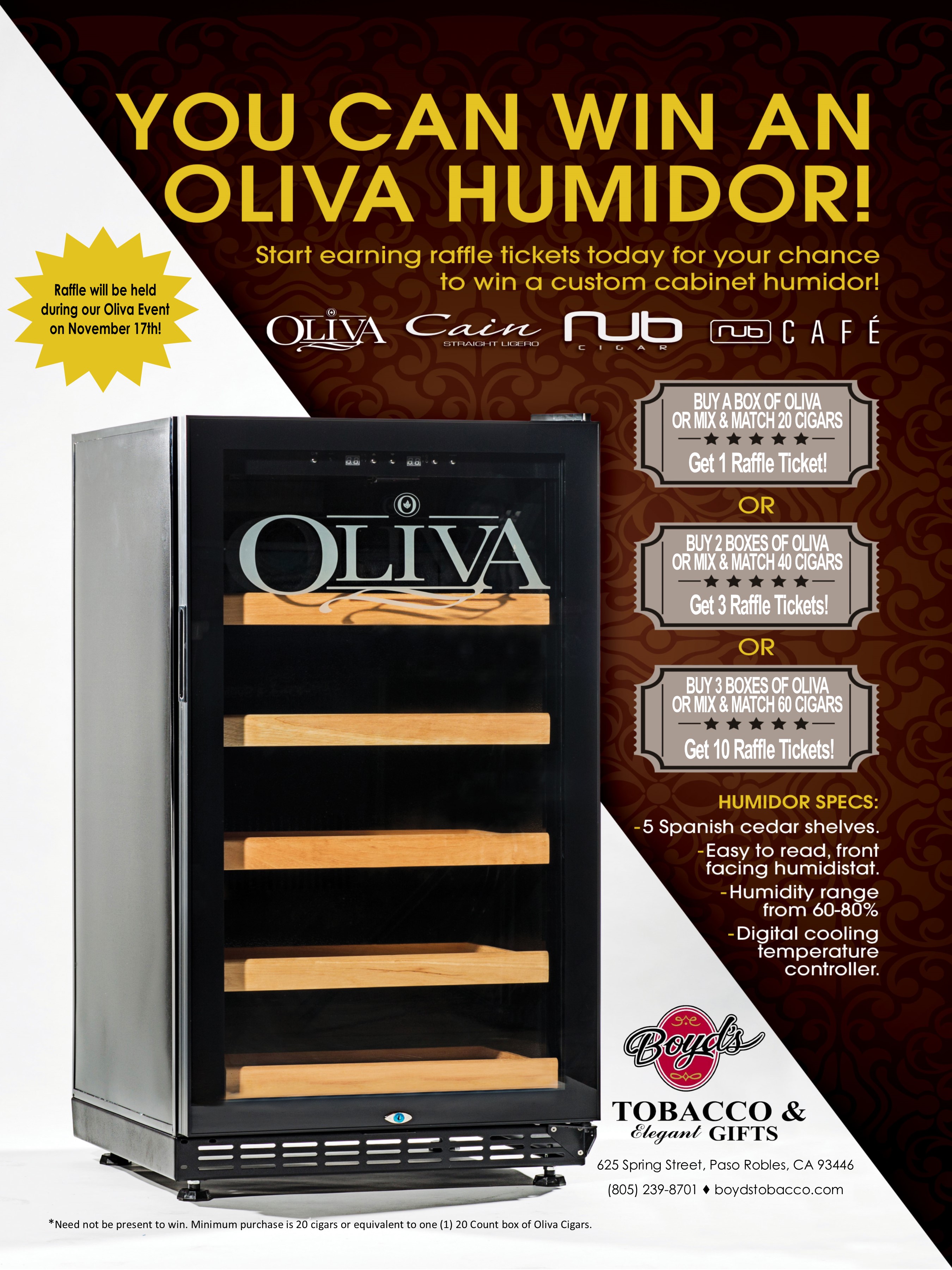 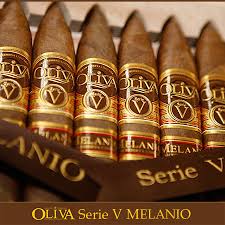 One look at the sharply pressed corners and carefully curved head and foot of the Oliva Serie V Melanio tells you this is no ordinary cigar. The Nicaraguan smoke represnts the pinnacle of achievement for Oliva Cigar Co. The Oliva Cigar story began in the late 1800s, when Melanio Oliva started growing cigar tobacco in Cuba. His heirs carried on the family tradition in the fields, but it was with grandson Gilberto Oliva Sr. who began making cigars. As with so many cigar stories, Gilberto Oliva Sr. faced a difficult road. He left his native Ciba in 1964, and eventually started working for the Plasencia family in Honduras. In 1995 he and his son Gilberto Jr. created a cigar within Plasencia's factory of their own, and shortened their brand name to Oliva. Business was tough in those days, and Oliva struggled. Faced with dwindling reserves of cash, in a cost-cutting move they turned to Gilberto Sr.'s robust stocks of Nicaraguan tobacco, which changed the flavor profile of Oliva cigars at a time when the interest in Nicaraguan flavor was increasing. Nicaraguan tobacco helped Oliva survive. The cigar that brough it to the attention of connoisseurs debuted in 2006: Oliva Serie V. Made by a small group of rollers and blended for strength and style, the Serie V line was an immediate hit. In 2012, to pay tribute to the first man in the family to grow cigar tobacco, Oliva added the Melanio version, which is distinguished from the original by its Sumatra-seed wrapper grown in Ecuador.

The Oliva Serie V Melanio has rich, big notes of leather framed by a range of coffee, caramel and woody intonations. It's a classic smoke. 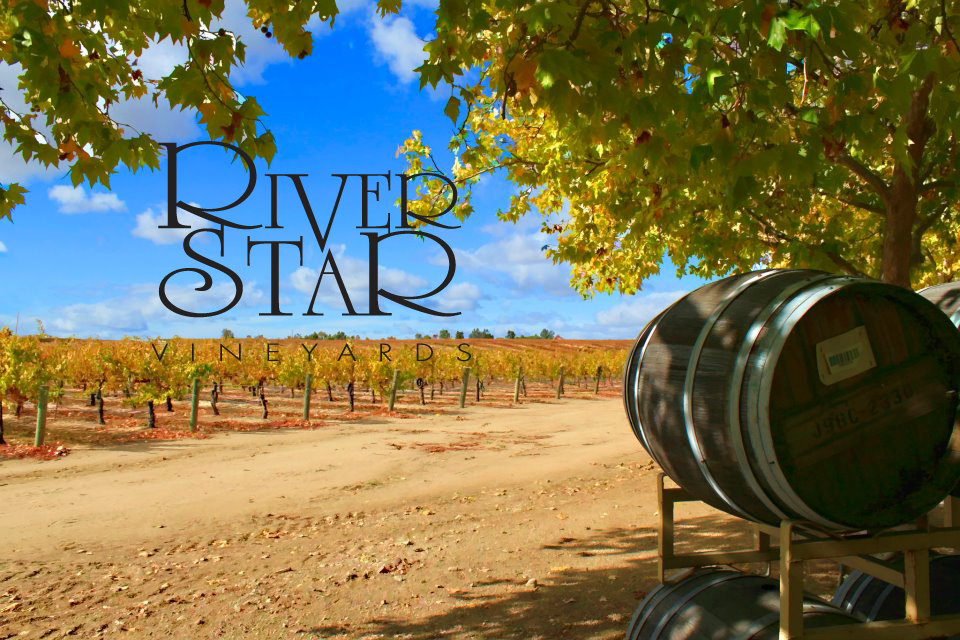 Since 1986, Riverstar Vineyards has been a fixture at the beginning of San Miguel's Pleasant Valley Wine Trail. Family owned and operated, the tradition continues as the second family takes ownership in 2016. Riverstar Winery is careful to carry on the tradition of great red, white, and blended varietal wines that are big, bold and beautifully crafted from the Central Coast's incredible fruit. The vines planted on site have been producing delicious fruit for over 30 years. The Reinertson Family looks forward to sharing their wines with each visitor as they build on traditions and add their own family values and love for wine. 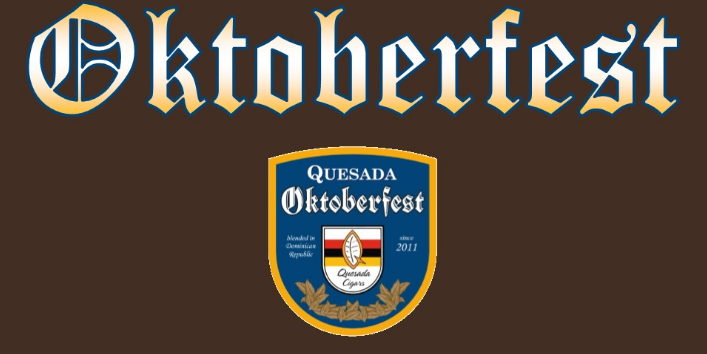 Join us for our annual Oktoberfest Celebration, featuring the limited edition Quesada Oktoberfest Cigars! We will have a traditional German feast, along with beer tasting, cigar specials, raffles, and more!

Come dressed in your lederhosen or beer maid costume for a chance to win a special prize!

$20 per person, which includes a cigar, dinner, entrance to the lounge, cigar specials, and so much more! Must be 21+. Must RSVP to attend.

All beer tasting purchases will be donated to the Food Bank of San Luis Obispo County.

Oktoberfest is one of the most famous festivals in the world. The yearly celebration attracts millions of people to Munich to partake in the festival, with millions more enjoying the famous beer produced for it. Traditionally, there is a cigar tent for Aficionados to enjoy a smoke with their brew. The Quesada family has blended a cigar specifically to be paired with the flavorful Marzen-style beer produced for Oktoberfest. Blended with a variety of flavorful Dominican and Nicaraguan tobaccos, the Quesada Oktoberfest is available in very limited quantities. Enjoy them with your favorite Oktoberfest beer. Only released the months close to October.

Join us along with Juan Lopez, National Sales Director for Gurkha Cigar Group, for an exciting night featuring the best from Gurkha Cigars! We will have wine tasting from award winning Michael Gill Cellars, cigar specials, exciting raffles, dinner, and so much more!

$20 for a daily membership, which includes a cigar, dinner, entrance to the lounge, cigar specials, and so much more! Must be 21+. Must RSVP to attend. 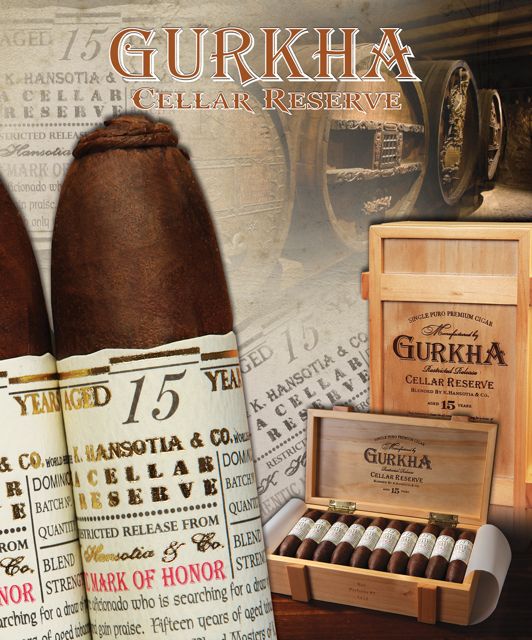 Rated 97 by Cigar Journal, Top 10 Cigar of the Year

The Vintage Cellar Reserve uses the finest quality 15-year-old aged tobacco, comprised of an oily Criollo 1998 wrapper, that combines an aged Dominican olor binder with a 15-year-old Dominican filler. Housed in unique wooden boxes that aesthetically evoke a maturing wine barrel, the Cellar Reserve is a delicious medium to full-bodied cigar that is full of flavor and complexity.

"After a few years of searching for the right wrapper and combination of tobaccos, we created this beautiful San Andres wrapped Nicaraguan masterpiece. We are very proud to unveil it as our best creation from East India Trading Company yet. A cigar worthy of its name: A true Classic, said Juan Lopez, National Sales Director and part of the East India blending team. 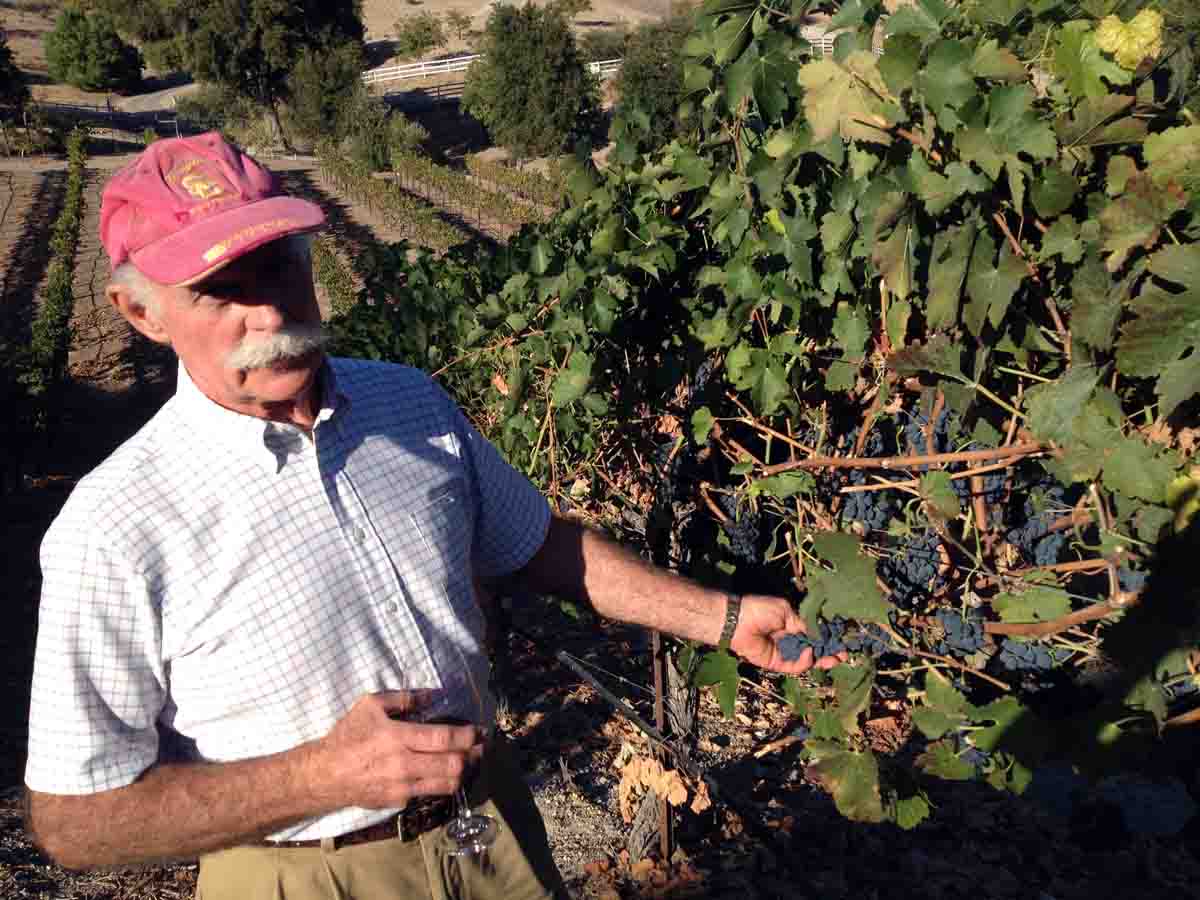 Nestled within the rolling landscape of oak trees, the vineyards are small, potent, and exquisite. The westside Paso Robles coastal estate takes full advantage of the excellent natural conditions: the mountainous terroir is known for its rocky, calcareous soil, and differing levels of hillside sun exposure allow vineyards to be specifically sites for each varietal.

This gives founding vintner, Michael Gill, the opportunity to cultivate luxurious wines unmatched in quality. Inspired by the historicism and beauty of illustrious French hunting lodges, the tasting room inspires images of time gone by. Nestled in the midst of surrounding vineyards and centuries-old oaks, it evokes a classicism and undulgence often unfound in Paso Robles.

Cigar of the Year Event!

Join us for the Cigar of the Year event featuring My Father Cigars including the #1 Cigar of 2015: Le Bijou 1922! We will have a gourmet dinner, wine tasting, cigar specials, exciting raffles, and so much more!

"It takes a profound understanding of cigar tobaccos to create a smoke that conveys uncanny impressions of dark chocolate-covered raisins, savory leather and a sweet-and-salty finish that resonates on the palate. This cigar has an ideal combination of power and finesse to make it No. 1"

"The smokes are delicious from first puff, with notes of nutmeg, white pepper and just enough strength without being overpowering. They are hard to put down. They are classics, 96-point smokes on our 100-point scale." 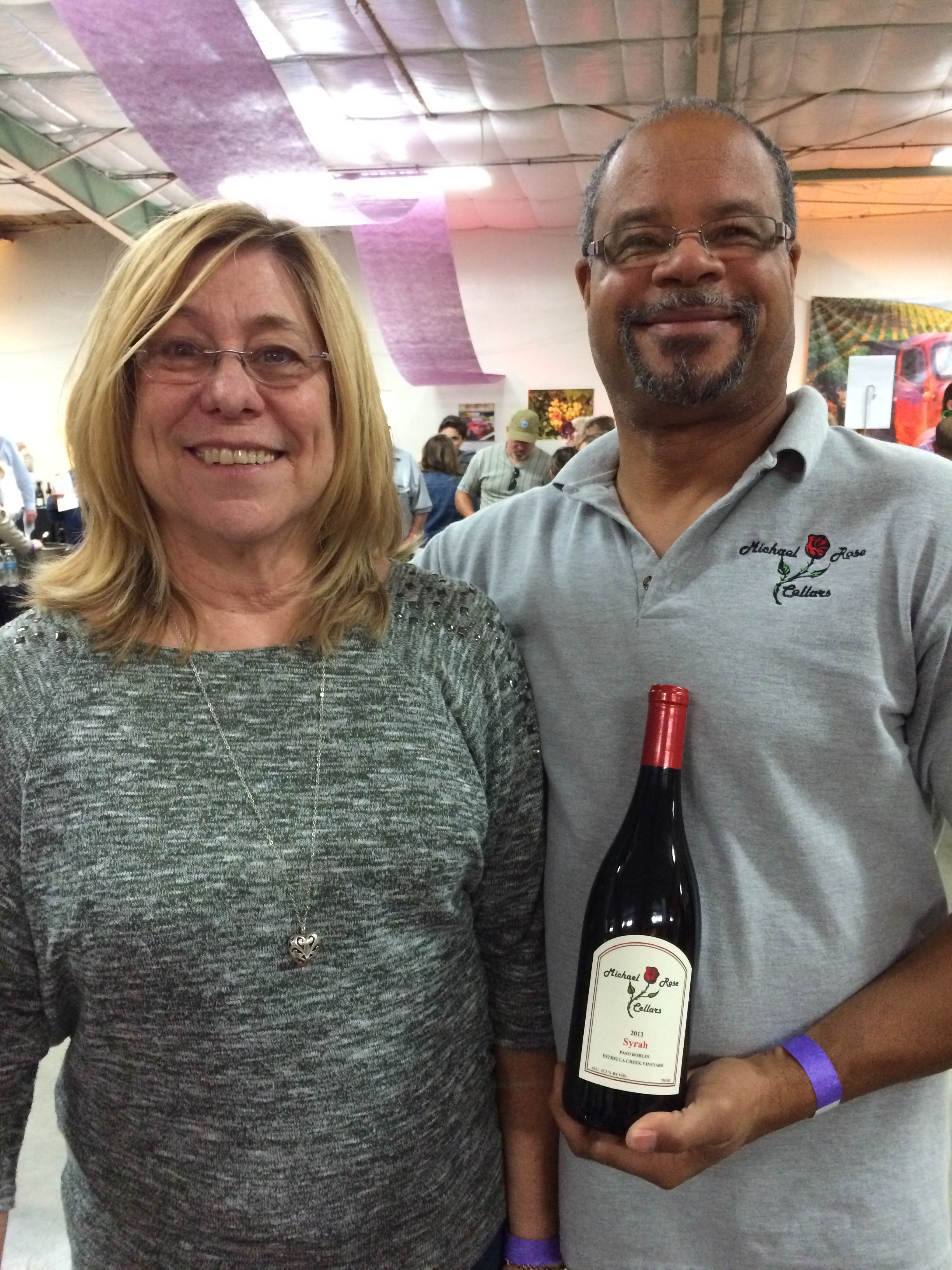 Michael Rose Cellars will be pouring during our August Event! 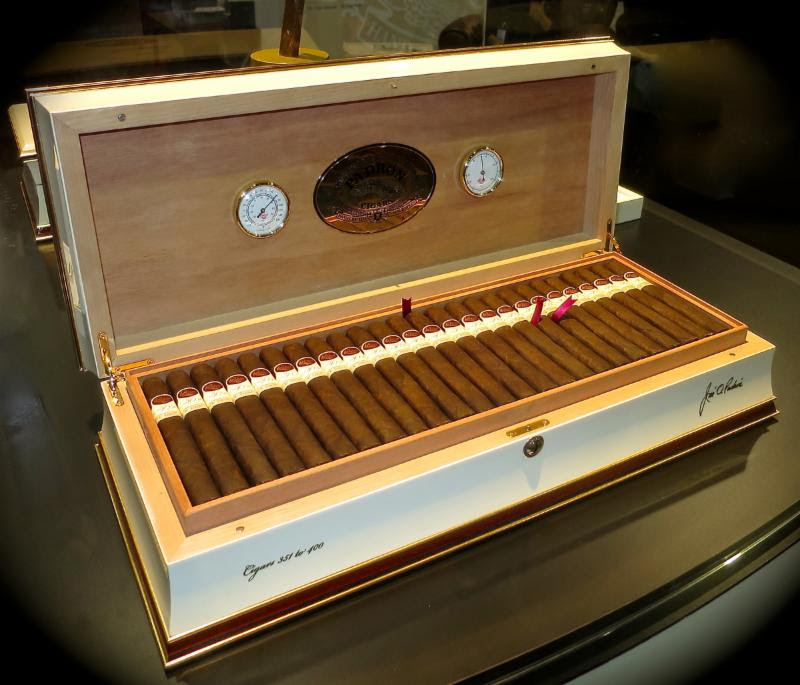 (SOLD AS ONE UNIT)

The Tobacco used in the 50th Anniversary Cigar has been aged ten years. The blend is full-bodied, complex, and balanced.

Only 1,000 Humidors have been produced.

The Original-Release Cigars have a sequentially-numbered anti-counterfeit band, printed in red ink.

Padron Cigars has produced an identical blend to provide refills for the Humidors for a minimum of five refills.

In order to be eligible to purchase refill cigars, the ultimate purchaser of the 50th Anniversary Humidor will be required to register the Humidor and Certificate of Authenticity.

Sales of the refill cigars wil be processed through the retailer who originally purchased and sold the Humidor. 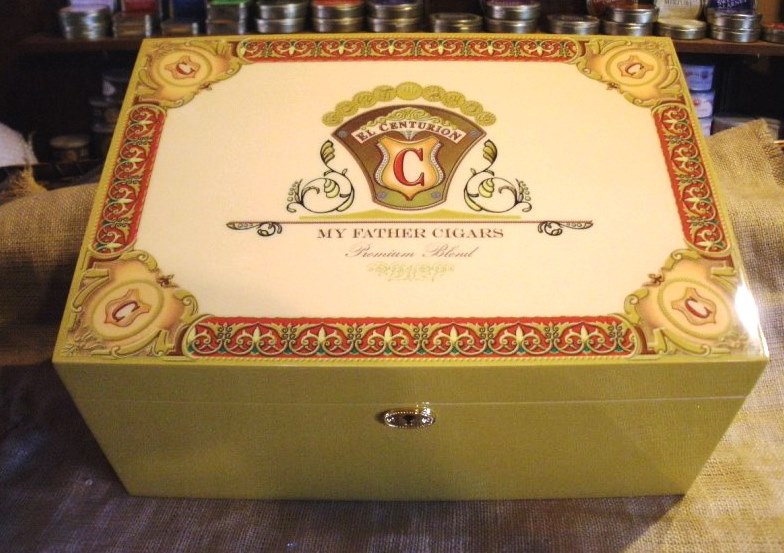 Receive 1 raffle ticket for every My Father cigar purchased!

The My Father El Centurion Humidor will be raffled on Labor Day!